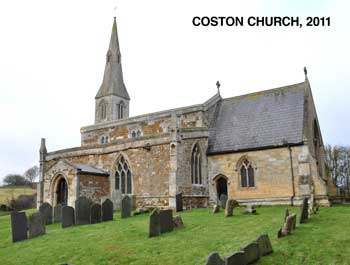 There were two main reasons why I devoted a lot of time in the 1980s to family history: one was that I was provoked by the frequent remark, "That's an odd name! Where's it from? Dutch or German, I should think."; and, my father never spoke about his background much beyond his father. So I set off to find out.

The name Geesin comes from the village of Gissing in Norfolk, England. This village name doesn't look very 'English' and probably came in by way of the early Viking invaders. In the 13th Century, it was written Gyssyngge and variants. Any person moving out of that village to settle somewhere else was 'de Gyssyngge'. Our branch moved west into Cambridgeshire and by the 15th Century, there were several families in the south of Leicestershire. By this time, the name had been modified to Geesinge, probably through dialect: even now in Leicestershire, Geesin is pronounced 'Geeezn'.

Working my way back, I established a proved line back to about 1650 but got stuck in the tiny village of Coston, Leicestershire, where the Churchwarden was William Geesing. [Coston is pronounced "Cozz'n" in those parts.]

This was a time of 'ecclesiastical unrest' with Oliver Cromwell rampaging about, and it is known that many country folk simply did not register birth,marriage or death events. Those of the family name who did register events but who could not write or who spoke their name to a scribe often got Geeson written down: this surname is much more common in England. Our branch were yeoman farmers who had enough property to warrant their leaving wills, thereby providing some illuminating detail to the history. Round about 1750, William's great-grandson, also William, and Churchwarden of Muston in the Vale of Belvoir, Leicestershire, made up and signed the church accounts books. He dropped the 'g' off the end of his name and signed 'Geesin'. A hundred years later, our branch of the family was still in Muston, pronounced "Muzz'n". Yet another William, great(x3)-grandson of the first, married a Dorset innkeeper's daughter Tryphena Kennedy. They travelled North to Gateshead, situated on the south bank of the river Tyne, and set up a lodging house. Just before this, in 1851, William's two youngest brothers, Charles and Frederick, set off for America, carrying the good Geesin name with them. Charles joined the Ohio National Guard but soon died of a fever and Frederick went on to establish the American branch of Geesin.

My father Kenneth Frederick was born 3 generations later, interestingly back in Leicestershire, but that was because his engineer father never had the same address for any two consecutive events, in some ways a victim of the 20th Century's wars and industrial flux. My father was soon whisked away from England and grew up in Paisley, near Glasgow, Scotland – and that's how I came to be born in Scotland. He had become a constructional engineer and wanted me to follow the pattern, but I rebelled. At age 17½, I joined the Original Downtown Syncopators and whizzed back down to England, little knowing that I should most probably have been there in the first place. In fact, I started my professional career in Crawley carpark, Sussex, because that's where the band coach was parked.

So it was in Crawley that I met my wife: as it says on the original sleeve of 'A Raise Of Eyebrows' "married Frances Helene Reid on 27/8/66 and a good idea!" Well, it still is: we produced 3 boys, Joe, Dan and Fraser, who are all producing stuff in turn.