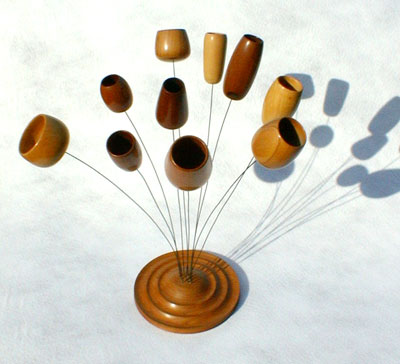 I love wood and sometimes collect it, intending to work it into some useful suitcase support or bookcase, but the woodworm usually gets there first. Particularly interesting are Walnut, Plum, Laburnum and Box.

After doing the sound structure for an Arts Council film on the wood sculptor Sam Smith, I got to know him and first experienced woodturning on his lathe. He was a rough scraper man with blunt tools so I sharpened them - I wonder if I should! If I had another lifetime - after all the other ones - I'd turn wood.

In England, there are so many wonderful apples with superb and contrasting flavours. You can't get them in shops of course. We've got Epicure, Ellison's Orange, James Grieve, Cox, Laxton's Superb and the great Bramley, but there's a constant war between the trees and fungal infection because we don't spray. I used to make cider from some of the Bramleys but the French do it so much better - with the right cider apple varieties - so le Chunnel is very handy.

If wine and beer is well made, without additives/chemicals, I'll probably like it. Less keen on red wine from cooked grapes: more keen on Burgundy (too expensive) and Loire than California and Spain. I get quite passionate about English real ale, properly served. Pubs with good cellars and caring landlords are rare and much appreciated.

My enthusiasm for Adjustable Spanners is the big one right now. The Americans call them 'wrenches', but good ones don't wrench, they grip and turn smoothly. My definition is: 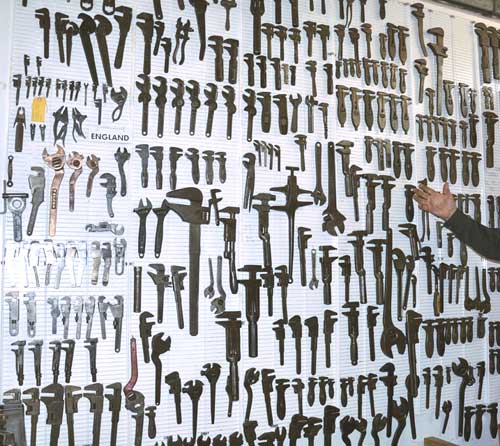 Any hand-tool specifically designed to be adjustable enough to grip and turn any nut which is within its span range - with the minimum of damage to the nut.

The tools usually have either:

1.  parallel jaws, of which at least one is adjustable, or;

3.  other novel means of firmly gripping a nut, such as a tube containing sprung hardened-steel pins.

I got fascinated by the hundreds of ways we've thought up to grip and turn a nut. It all started when I 'liberated' a rare wedge-adjuster from my Dad's toolrack. Then I used to pick them up at car boot sales, but the best old sheds of England have been emptied, so now the sources are dealers and eBay.

I like them 'as found', rusty, cleaning by negative electrolysis which gently lifts the rust off without invading the metal. There were so many intriguing mechanisms and styles from about 1840 to 1910 that I'm now writing the history of the adjustable spanner in the UK, leaving America to those who are closer, and reserving Europe for myself later.

Indian and Chinese Food: I've never found birianis like they used to make in Leicester in the 1960s, so I set out to collect Indian cookbooks, the right spices and any techniques along the way - still learning, and doing. With most eastern cooking, the preparation embodies a lot of philosophy.

Genealogy. "Geesin? That's an odd name. Where's it from?" I was asked that question once too often so, spurred on by a virtual silence from my father, I set out. One of the most memorable events was cleaning the earliest-known 'Geesing' gravestone in the depopulated village of Barkestone, Leicestershire. I got a direct line back to 1650 with intermittent links to the village of Gissing, Norfolk around 1200. Sorting that out would take another lifetime. Now I've found American cousins an' everything. This quest taught me a lot about research techniques that I'm now using to put some human flesh on metal bones.