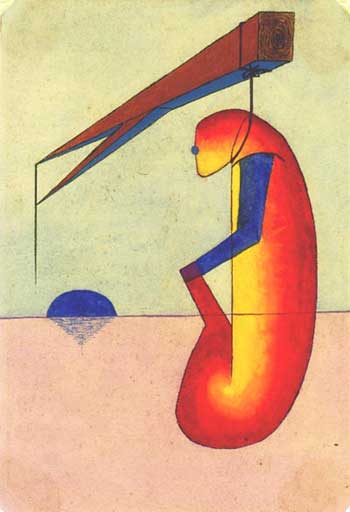 You'll see some of the bad ones in Musical History. The first main good ones were Victor Borge, The Goons, Chic Murray (Scottish comedian, deceased) and Surrealism.

About the same time as banjo fixation I started to paint with water colours, sometimes greatly softened and applied with a collar-stiffener. Sometimes I couldn't sleep until I'd done one, leading me to the conclusion that,

"Making art, being creative, is a positive way of using our nerve-ends."

I walked about with my bible 'The Secret Life Of Salvador Dali' under my arm. He was a great artist - at playing the media. Of the other surrealists, I still hugely appreciate Yves Tanguy and collect the illustrator Gustave Doré.

Absurdity in general fairly fires me up. When I was starting my own one-man eruption in clubs like Middle Earth, London, I never forget catching the end of the anarchic, dadaist organisation called 'The Alberts'. One of them, Bruce Lacey, played the amplified bicycle wheel and I very nearly wet myself.

What I always called 'virtuoso ethnic music', later commonised as 'World music', has been a strong influence. When my good friend, jazz collector and sound restorer John R.T. Davies first played me a 1930s Dutch radio transcription disc of Balinese Gamelan, I was seduced. This soon led me into Indian and African music, and now I'm an avid follower of the bansuri (Indian bamboo flute) virtuoso Hariprasad Chaurasia and his disciple Rupak Kulkarni.

You can see that many individual artists amaze me. Labels and categories are just a bloody nuisance, but I love Prokofiev, Rachmaninov, Elgar, Wagner, Schönberg, Varèse and Berio and hate Britten and Stravinsky. Joni Mitchell and Jaco Pastorius appeal too. A bit like pears and wine, I like things to mature before consuming.

The Dali bible has long gone but I found a better one about 25 years ago: 'The Importance Of Living' by the 20th Century Chinese philosopher/novelist Lin Yutang (surname first). He was an advocate of Taoism (the inevitable balance of all things) and gently reminds one of the Reasonable Way with such topics as 'the Importance of Loafing' and 'On Having a Stomach' - no mystic mug.